What can biology tell us about two paintings by Van Gogh, and how do these fit with what art history says?

An afternoon playing with digital-painting on a mobile tablet in front of Two Crabs (1889) by Vincent van Gogh (1853—1890) in the National Gallery in London has piqued my curiosity. The way he had painted parts of the crab led me to look up a related work online – A Crab on its Back at the Van Gogh Museum in Amsterdam, painted in “Paris, September”.

According to the National Gallery:

“This is thought to have been painted soon after Van Gogh’s release from hospital in Arles in January 1889. On 7 January he wrote to his brother Theo: ‘I am going to set to work again tomorrow. I shall start by doing one or two still lifes to get used to painting again’. He was probably also inspired by a woodcut by Hokusai, ‘Crabs’, which was reproduced in the May 1888 issue of ‘Le Japon Artistique’, sent to Vincent by Theo in September of that year. In a related painting in the Van Gogh Museum, Amsterdam, the crab is shown lying on its back. Here it is probably the same crab shown both on its back and upright…”

Were these two paintings studies of the same animal, or different ones? What might be the chances of getting two crabs that look so similar? Something might not quite add up, from a crab’s point of view…

Some common observations on all the crabs from both paintings:

A crab has five pairs of limbs; any one or more of these ten appendages may be shed. They are biologically designed to lose limbs under certain circumstances (for example, to escape from a predator) because these can be regenerated, similar to the way a lizard can shed and re-grow a tail. Crab limb regeneration happens in stages through successive moulting – the growth appears as a stump after the first moult and gets bigger at each subsequent moulting cycle until full size.

A crab with a missing left claw. Source: The Fish Site

Another crab with a smaller right claw during the regeneration process. Source: The Fish Site

From the paintings’ dates and locations (Paris 1887, Arles 1889), Van Gogh would have had to find two crabs on separate occasions 17 months apart, with exactly the same limbs present and missing, and of the same gender. Unless he actively looked for a crab same as the one he had in 1887, this seems unlikely at ‘random’. We could quantify this likelihood by calculating the statistic probability, in a rough-and-ready way, assuming (1) each limb has an equal chance of being lost, and (2) a certain male to female ratio (see below). The real likelihood, however, might be less if we take into account that missing limbs in both crabs would also need to be at around the same stage of the regeneration (moulting) cycle.

A 1995 review ((Juanes, Francis; Smith, L. David (1995). The ecological consequences of limb damage and loss In decapod crustaceans: a review and prospectus. Journal of Experimental Marine Biology and Ecology, volume 193, pages 197–223. [PDF file, 1.9mb])) based on 27 studies on 14 species of Decapods (a subcategory of Crustaceans which include crabs, lobsters and shrimps) found that the limb-type most commonly lost was the claw. One of these reviewed studies was a 1973 paper ((Bennett, D.B. (1973). The effect of limb loss and regeneration on the growth of the edible crab, Cancer pagurus, L. Journal of Experimental Marine Biology and Ecology. Volume 13, Issue 1, pages 45–53)) on Cancer pagurus population in Norfolk, Yorkshire and Devon in the United Kingdom. Approximately 10% of the animals sampled (1482 males and 938 females) had missing claws. However, we would need a separate calculation for female crabs only. Male crabs use their claws for combat, display and courtship, so they may have a bigger chance of losing them.

The chances of finding female crabs can also vary with seasons, locations and selective fishing.

According to another research ((Klaoudatos, D. S., Conides, A. J., Anastasopoulou, A. and Dulčić, J. (2013). Age, growth, mortality and sex ratio of the inshore population of the edible crab, Cancer pagurus (Linnaeus 1758) in South Wales (UK).Journal of Applied Ichthyology, 29: 579–586. doi: 10.1111/jai.12122)) (samples taken from February 2001 to September 2002), female crabs were much harder to find than male ones from January to March, and from July to August ((Figure 6, average monthly sex ratio, Cancer pagurus, South Wales (UK) )) in South Wales (UK). The winter scarcity is linked to the reproductive cycle – pregnant crabs tend to hide and be inactive during the colder months. The second scarce period may be correlated to females moving inshore for moulting and reproduction.

Catch location can also skew the ratio, because female Cancer pagurus tend to live in habitats with sand and gravel, whereas males favour rocky places.

Female crabs carry eggs during the winter. For a crab found in August or September, as in A Crab on its Back, no egg sack would be expected. In January, however, one would expect a mature female to have an orange egg mass under the flap on its abdomen. This is not the case in Two Crabs. Perhaps it was still an immature animal? The abdomen is a secondary sexual characteristic ((Hartnoll, R.G. (1974) Variation in Growth Pattern Between Some Secondary Sexual Characters in Crabs (Decapoda Brachyura). Crustaceana 27, pages 131–136. doi:10.1163/156854074X00334)) and becomes proportionally wider ((Haig, J.A.; Pantin, J.R.; Salomonsen, H. & M.J. Kaiser (2015).
Size at maturity of the edible crab (Cancer pagurus) in Welsh waters. Fisheries & Conservation Science report No. 51, Bangor University. Pp 26, figure 11. [PDF file, 1.5mb])) as a female crab grows larger. The animal in Two Crabs appears to have a slightly narrower abdomen than the one in the other painting. But unfortunately, the width proportion itself is not a completely reliable maturity indicator.

In Two Crabs the mouth parts were crudely painted in red outlines; Van Gogh was less interested in depicting the details here. By comparison, A Crab on its Back received more attention. 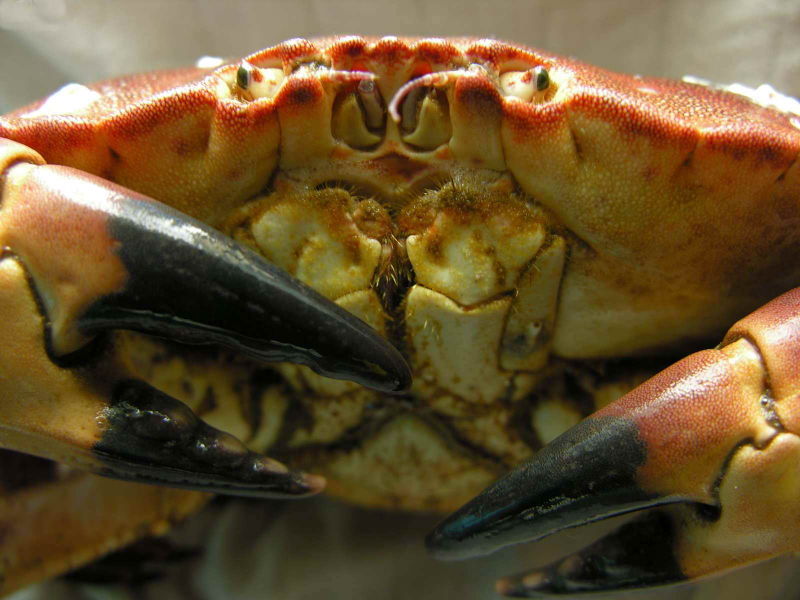 Close-up of a crab; only the first pair of feeding appendages are visible. Source: Wikipedia. Photo: Luis Miguel Bugallo Sánchez

A crab’s mouth part consists of 3 pairs of feeding appendages. Only the first pair is visible when at rest (Two Crabs appears to show this). The second and third pairs are much smaller and hidden by the first. The mouth depicted in A Crab on its Back does not look like it should on a regular animal. Even if it was only showing the second and third pairs of feeding appendages, it is still anatomically incorrect. Real ones are segmented differently and bend towards the centre mouth cavity. The bristles (or setae) should be growing on the opposite side of the appendages, contrary to how they were painted.

Van Gogh had used some artistic license when drawing the mouth. Could he have done so in other places too, such as the proportions? It appears so. In Two Crabs, the left claw of the right-side-up crab is proportionally smaller than its right claw. In the up-side down view, it is the other way around – the left claw looks bigger. If the claws were out of proportion, could the abdomen’s proportion be inaccurate too?

Perhaps the only reliable information from both paintings is that both crabs are females, with the first pair of walking legs missing. Given the similarities between the two paintings, and the challenges of finding such similar animals in different seasons, I would expect the two paintings to have been done closer together in time. Maybe even one straight after the other… well, dead animals stink! The limbs will also become rigid as the flesh dries out. If the two studies in Two Crabs were painted from the same animal turned around, then there has to be moisture content in the flesh because the leg joints show flexibility.

Van Gogh wrote letters frequently. This gives art historians a good insight into his state of mind and other affairs. In 1887, Van Gogh was still of sound mind and living a good life, visiting Salons and organising his own exhibitions. In 1889, he seemed well in the beginning (even though he was newly minus an ear), but quickly descended into a fragile mental state again. He was in-and-out of the hospital and later on, committed himself to an asylum.

He sometimes drew and mentioned certain works in his letters, but never any crabs. These paintings’ places in time are jigsaws in a puzzle, postulated around unspecific mentions in the artist’s letters ((“Although Van Gogh did not refer explicitly to Deux crabes or its companion piece Crabe (fig. 1), these two oils are likely to have been among the studies mentioned in the letter,…” Sotheby’s catalogue note, lot 5. Impressionist and Modern Art, Evening Sale, 21 June 2004.)) and probably other analysis, debated by art historians ((In his book Vincent van Gogh. The Years in France. Complete Paintings 1886—1890 (2013, page 65), Walter Feilchenfeldt dated both paintings to winter 1888 in Paris.)).

Are there any other evidence that date these two paintings more definitively?

Note: results of scientific findings can differ between crab fishery stocks, catch methods, locations and environmental conditions (such as temperatures). To get a better understanding, we would also need to study historic French fishery records and relevant research paper from the late 19th Century.

Copyright © 2009—2022 Viviane Li All Rights Reserved. Unauthorised use and/or duplication of this material without express and written permission from the copyright holder is strictly prohibited. Excerpts and links may be used, provided that full and clear credit is given with appropriate and specific direction to the original content. Images must not be cropped or manipulated in any way. | Contact